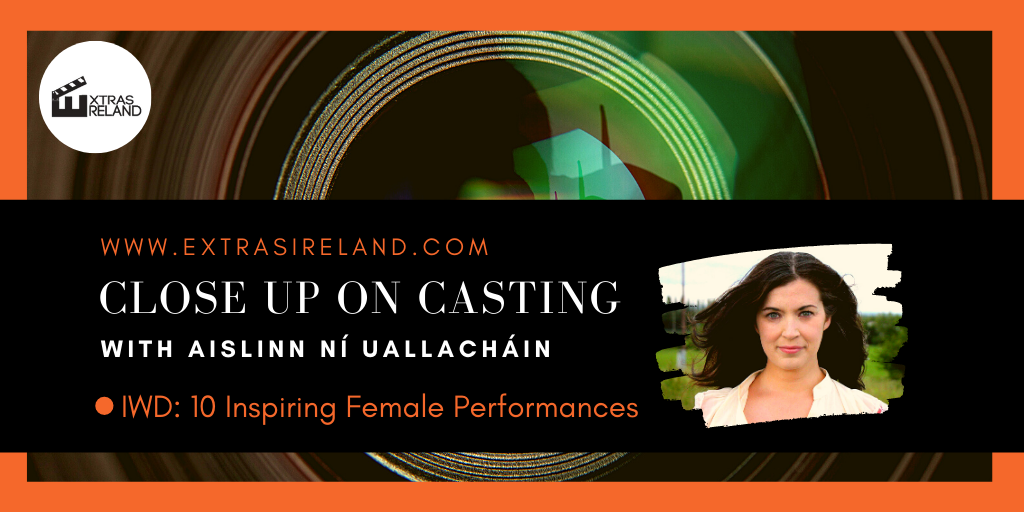 Today is International Women’s Day and I’ve been thinking about TV and Film performances that have inspired me over the years as both a creative and a human being. I could go on and on but here are just ten of them.

What performances by women have inspired you?

I’ve been a lover of musicals since I was tiny and one of my absolute favourites growing up was Annie. I remember we had to record it off the telly onto video tapes numerous times as I kept wearing the tapes out from overuse! You might think that as a little girl, the character of Annie was the draw for me but it was always Miss Hannigan who affected me the most. I thought she was fascinating. Carol Burnett is just amazing in it – funny, sad, terrifying, nasty and pitiful in equal measures. I’ve always loved this performance as an example of playing a realistic ‘baddie’. As she says in this interview here, baddies don’t think they’re bad – it’s everyone else that’s the problem. Great advice!

As soon as I started watching this series a couple of years ago, I was immediately blown away by Sarah Paulson. Her portrayal of District Attorney Marcia Clark during the OJ Simpson trial is one of the best performances I’ve ever seen on screen, hands down. Outwardly having to appear strong and unshakable in the courtroom while on the inside battling with a divorce, raising her two boys and unwanted media attention, she is an inspiration, as is the real Marcia Clark. Something I love in an actor’s performance is trying to hide their true feelings from those around them and Sarah Paulson is a master.

Being a musical lover, I don’t know how this one slipped through the net for me as I only watched it recently for the first time. Oh my goodness, what a genuine, moving performance from Jennifer Hudson – I couldn’t stop thinking about it for days afterwards. Watch the below – it speaks for itself. No wonder she won an Oscar for it.

Lois and Clark was a staple in our house growing up – in fact I recently found a diary from when I was about 12 years old and I had written that it was my favourite thing! I loved (and still love) Teri Hatcher in this. I’m always impressed by seeing a woman portrayed as both professional and feminine and she is magnificent in this. Re-watching it has actually been a huge source of nostalgia and comfort to me over the last year or so during the pandemic. Funny, sweet, hopeful. Love it.

I’m a sucker for a rom-com and one of the funniest I’ve seen of late is Always Be My Maybe. Ali Wong co-wrote and stars in this and she is just hilarious. A tale of two people who drift apart and find their way back to one another, it’s a lovely one to put on for a cosy night in. I love her complicated portrayal of Sasha – smart, ambitious, kind, emotional – very rounded and realistic.

Watch this Ted Talk by Francesca – she’s truly inspiring. I first came across her in Extras back in 2005 and thought she was brilliant as the hopeful, cheery sister of Ricky Gervais’ love interest. Francesca has Cerebral Palsy and maintains that it’s the secret source of all her comedy power – I loved her in Extras and her talk here on happiness and creativity is excellent.

This is another one I re-watched over lockdown and Anjelica Huston is mesmerising in it. I love her poise as the Grand High Witch – she’s so classy and composed one minute and dramatic and horrifying the next. That’s always something extremely impressive to me, when an actor can go from one extreme to the other with all the nuances in between. She’s fantastic.

I first came to love Mindy Kaling as Kelly on the US series of The Office – anytime she’s onscreen I’m immediately drawn to her. Also a writer on the series, she is uniquely talented and charismatic and was a huge inspiration to me when I was an actor myself. Never afraid to look silly or make a fool of herself, I realised that is the key to comedy – you can’t be too self-aware or take yourself too seriously. If you do, it will get in the way.

Only the Lonely is lovely film starring three legends – John Candy, Ally Sheedy and the late Maureen O’ Hara. I’ve always been a fan of Maureen – The Parent Trap from 1961 is another favourite – and I remember watching this with my own mother years ago on a lazy Sunday. Maureen plays the controlling mother of John Candy and finds it hard to deal with his budding relationship. Terrified of being left alone when he’s all she has, she acts out and tries to ruin his chances. A wonderful insight into motherhood, being human and the challenge of letting go of someone you love. It’s always stuck with me.

I’ve never seen Dianne Wiest be bad in anything. Footloose, Hannah and her Sisters, Parenthood, The Birdcage… she’s always fantastic. I always forget that she’s acting, she’s just that good. The first time I saw her was in Edward Scissorhands and I thought she was phenomenal. I love this scene here where she meets Edward for the first time – her transitions from curiosity to fear to worry to care are beautiful. She always brings her characters and the audience on such a journey and that is a real gift I think.