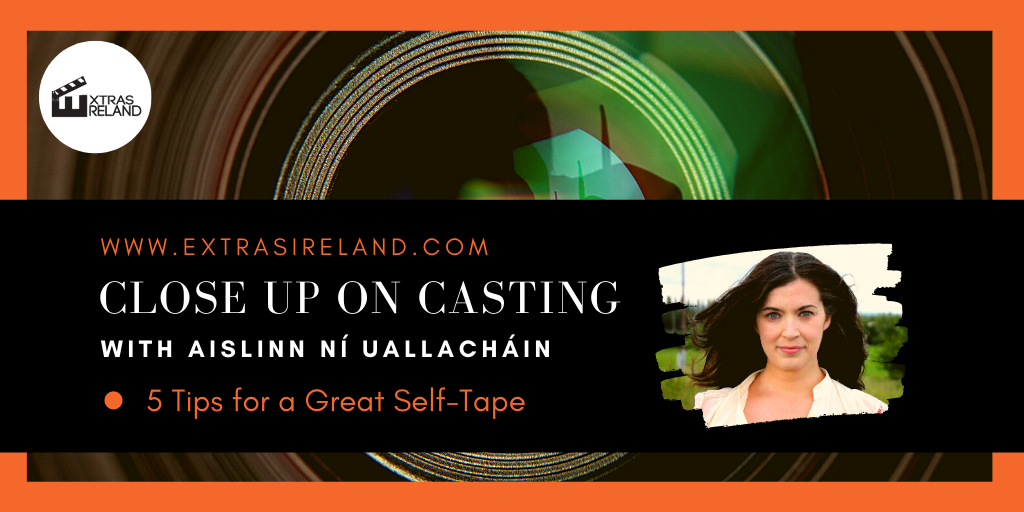 A necessary part of being a Performer is auditioning. Love it or hate it, it’s really the only way for a Production to find their ideal Cast unless they already have a name in mind. As an Actor myself for over 10 years, it’s one of the areas that Performers often ask for advice on, whether they’re new to the business or a seasoned pro. Over the past few years (and the last few months in particular), the world of auditions has been steadily changing. More and more Productions and Casting Directors are opting for self-tapes from Actors rather than meeting them in the room. Either they’ll cast purely based on those tapes or will select their favourites for a second round, either in-person or virtually. Based on my own experience as both an Actor and Head of Casting at Extras Ireland, here are some of my tips to make your self-tape great.

1. READ READ READ the instructions. Then read them again.

The biggest piece of advice I have for self-tapes is to read all the instructions you’re given carefully. I can’t stress that enough. I know that when you get a request for a self-tape, especially if it’s a tight deadline, you want to tape as quickly as possible to get it over to your Agent or to the Casting Director in time. Whoever is sending you the instructions will give you all the information they can, telling you what to film, how to film it and how to send your video. However, many times I’ve seen people perform an incorrect part of the script, read in an incorrect accent or ignore an important directorial note – all due to not reading the instructions carefully enough. Make sure you’re not falling at the very first hurdle before you even film anything.

If you’re filming a self-taped audition, even if the deadline is tight, you must know the script off by heart. Firstly, it’s very difficult for you to play a role convincingly if you have a script in your hand – it’s always going to hinder the performance. Secondly, acting for screen is all about the eyes so we need to see them – these are what you need to master in order to succeed. If you’re constantly looking down at your piece of paper, eye contact is broken and the reality of your character and the scene is spoiled for whoever is watching you. Learning lines quickly is a central part of being an Actor and if it’s something you find difficult, you’ll need to practice to get better at it. Prep is so important so make the most of the time you have.

As an audience member, for me there’s nothing more satisfying than watching a character transform before my very eyes. For example, I recently re-watched Superman (1978) starring the wonderful Christopher Reeve. Despite the incredible special effects and storytelling in general, my absolute favourite part of the entire film is a moment towards the end (SPOILER ALERT!) where Superman has managed to save the day and is looking understandably proud of himself for saving millions of lives. Suddenly, the look across his face when he realises he’s forgotten to save Lois Lane is just magical. Crushing. Goosebumps. When preparing a script for a self-tape, pay close attention to moments of transition where you can make the audience feel like that and bring them on a ride.

4. Treat it as a Proper Performance.

If you’re doing a self-tape, it’s important not to play it as if it’s an audition. Imagine that this is the actual shoot and you have the part already. Show off what you can do and be confident in the choices you make when performing. Based on the script, make clear and strong choices about who this character is, where they are, what their history is, what their relationship is to the other character(s) in the scene etc. Not always easy when you’re only receiving a short section of the script but you need to think about these things to make the scene feel real. That is your job – to make the audience feel that this is really happening. The best Actors are the ones who can make any scene feel real, whether it’s shot in Hollywood on a soundstage or in a kitchen on a mobile phone.

Again, often when you’re given instructions for a self-tape, your inclination may be to get it filmed and sent off as quick as you can. You might do a couple of rehearsals and then get a take where you say all the lines perfectly. For a lot of Actors, this first take that they’re happy with is what they will send. But it’s not just about saying lines correctly. My advice is, once you get to a take that you think is good, do another couple of takes. Don’t just settle for the first good one that you do. Keep going because you may end up doing much better takes once you know you have one in the bag. Once you know you have a good take, a little bit of the pressure is off – and that’s often when performers do their very best work. Don’t just settle for second best.

So there we have it, just a few pointers on self-tapes based on my own experience of both filming and watching them. They are absolutely here to stay so if you want to act, you need to become skilled at doing them. Don’t just wait until you have to submit one for a role – always be practicing and getting better at doing them. Pick a scene from a TV show or film that you love and whip that camera out!

If you’re in need of Extras, Actors or Models for your next Creative or Commercial Project, get in touch. We’d love to help. Simply email info@extrasireland.com or call us on (01) 634 3112 and let’s see how we can collaborate.