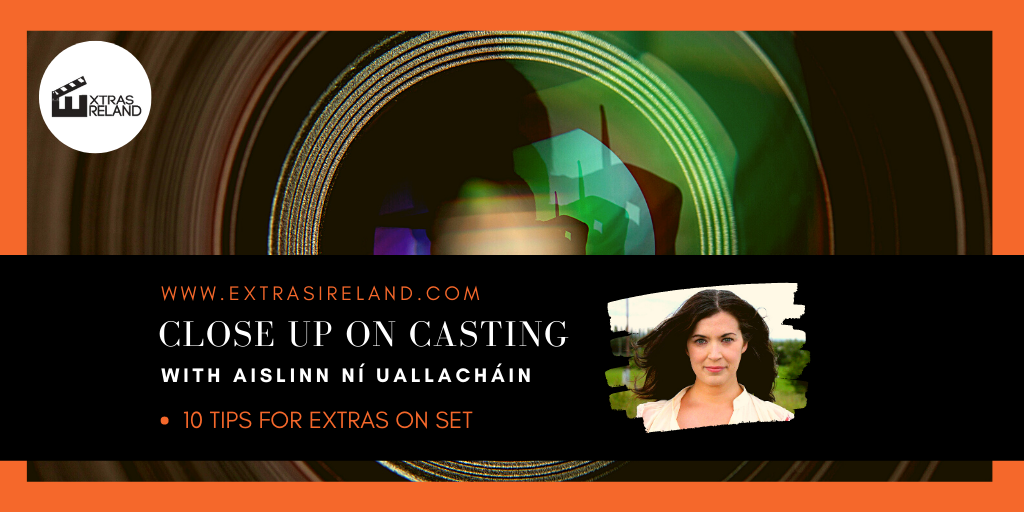 Starting out, I spent a lot of time working as an Extra – Fair City, Raw, Primeval, Vexed, Crimecall, Penny Dreadful, What Richard Did, Camelot, Triage, Albert Nobbs, The Apprentice and Ripper Street to name a few. Now working in Casting, I have experience on both sides which is so important I think – always love passing on some of my wisdom to help others! Here are some tips (and the reasons behind them) for those out working as an Extra to help you have the best experience possible and to increase the chances of being re-booked.

Know that you are important.
As I mentioned in my previous blog ‘Extras – Increase Your Chances’, I know Extras often feel like they’re the last to know anything but I want you to know that you are extremely important. We always get specific requests at Extras Ireland so we’re searching for the perfect person/people for a job. Production won’t say – ‘I need 20 extras, it doesn’t matter who, just book whoever.’ They’ll be very particular and if they pick you, they want and need you.

Be on time.
You MUST be on time for your shoot. Remember that whatever your call time is, you’ve been given that time for a reason. You might have a tricky costume so Wardrobe need time to get you into it or if you have lots of hair (like me!), Hair and Make-up may need longer with you than other Extras. Make everyone’s job easier and arrive at the time you’re asked to. If you’re late, a note is always made by Production and you may not be booked again.

Respect props and costumes.
I think a general rule of thumb is to remember that everyone on a set has worked hard to get there and wants to create something fantastic. Whatever costumes or props you’re given, be careful with them. You don’t know how long someone spent making a dress or chair or how far someone had to drive to get a specific hat or cup because it’s important to the scene. Respect hard work and if something rips or breaks, report it so it can be repaired or replaced.

Don’t make changes.
On period dramas, prepare to look dishevelled and dirty. I can’t tell you the amount of times I saw people ‘fix themselves’ – tidy their hair, apply fresh make-up, adjust costume to make it less baggy etc. Of course they were always brought back to be re-done – so terrified of not looking their best on screen. Well, guess what? You’re a beggar in Victorian London – you’re not supposed to look good! And guess what else? They were never booked again.

Don’t expect too much.
I learned so much from watching Actors. I also learned that some Extras can get strangely annoyed if Actors aren’t chatty and being good craic. ‘So-and-so isn’t very friendly’. It’s not their job to be friendly! It’s their job to do a good job. They’re trying to remember lines, what’s coming next, the previous scenes so they’re constructing the story well, and for many, worrying if this is going to be a big success or a huge flop.

Take in as much as you can.
To be honest with you, Extras generally spend a lot more time on sets than actors. I learned so much as an Extra which really helped me when I was a working Actor. The language used on set, what jobs different people do, how a day is structured, how to work with the camera, etc. So if you’re someone who is starting off as an Extra and hoping to make Acting a career, drink it all in because you’ll probably never spend so much time on sets again!

No Social Media.
It’s a big no-no to post anything online – what you’re filming, where you are, what the Actors are doing etc. Anyone who worked on Game of Thrones knows what it’s like to be sworn to secrecy (figuratively and legally) – imagine the biggest TV show in the world being ruined because an Extra posted about it. You have a glimpse into scenes, characters, locations, storylines and sometimes huge twists in a plot – you cannot post anything online.

Be positive.
You never know what you’ll be doing – in a battle, eating in a cafe, escaping an explosion… You have to be up for anything and while daunting for a first timer, experienced Extras will usually take it in their stride and help newcomers. Be positive and adopt a Can-Do attitude, not a Do-I-Have-To? one. It’ll make for a more enjoyable experience and you’re more likely to be booked again. Also, remember ‘Please’ and ‘Thank You’ go a long way.

Enjoy yourself!
If you’re selected as an Extra for a job, make sure you enjoy it. I know the days can be long and tiring but sets are very exciting places to be. You meet fascinating people, all the star of their own story. As someone who’s naturally shy, meeting new people every day was great for me – in fact, I met my best friend on Camelot back in 2010 – so incredibly grateful. People make great friends and I know a few who’ve even met their other half. So make the most of it!

I hope this has been helpful! Do you have any stories from being on sets? Do you have other tips that aren’t in here? Let me know, always delighted to hear about your own experiences!